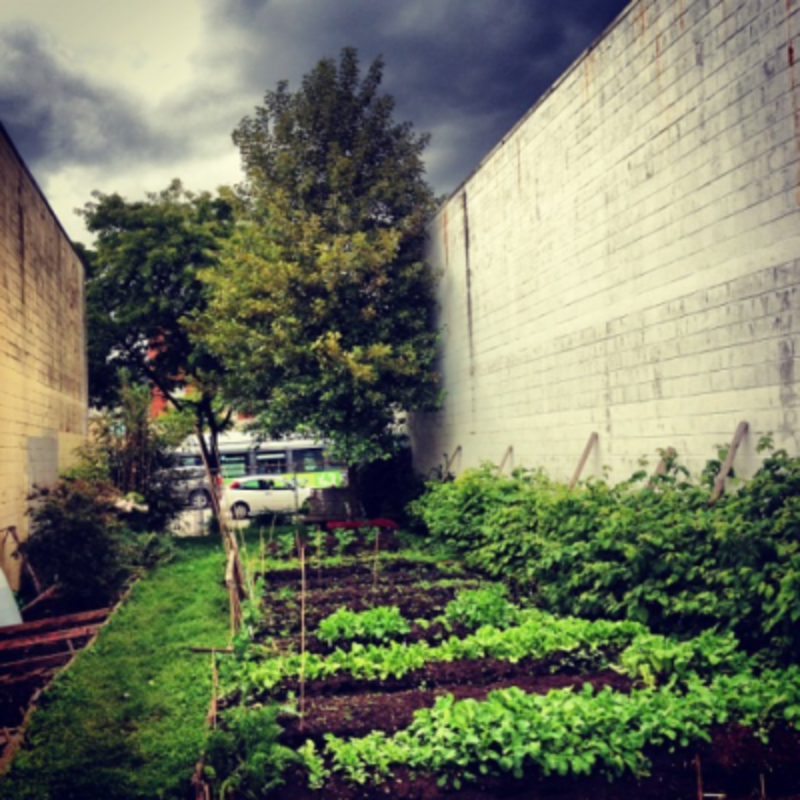 A few summers ago, I spent most every Wednesday afternoon on a little plot of land in the Downtown East Side. Two vacant lots across the alley from one another, wedged between Hasting on one side, and Pender on the other, halfway between Jackson and Dunlevy.

I’d go over with my friend Ron, a resident of the neighbourhood who was looking to gain some skills, connect with other people, and get out in the sun to do something with his hands.

We’d meet up at Jacob’s Well, a storefront ministry just underneath the Jubilee rooms on Main Street. We’d chat for a bit, grab a cup of coffee, and head over to see what Jodi had for us to do that day.

Those summer afternoons are still significant highlights of my time in Vancouver.

Even if there was something good going on at Jacob’s Well, I always found myself looking forward to heading over to Red Clover Farm, a tract of land now tended by our own Jason Wood.

The conversations were rich. The tasks were real, and they required something of my otherwise sedentary body. There was something meditative about the slow work of tending to this little oasis in an otherwise busy traffic corridor. But I learned something else that summer.

The Kingdom of God is an invasive species.

I learned this from the thorn pricks on my arms and legs, and the scratches on my hands as I harvested berries to be shared with friends in the neighbourhood..

The biblical writers – Matthew, Mark, and Luke, anyway– record Jesus saying that the kingdom of God is like a mustard seed. But if Jesus had been with me, joining Ron and Jodi tending to the garden plot at Red Clover Farm, I think he’d have picked a different metaphor.

If Jesus had been with us those summer afternoons he just might have suggested that the Kingdom of God is like a Himalayan blackberry.

Thorny, prickly, resourceful. The Himalayan Blackberry reproduces as much through the distribution of root and stem fragments as by the seeds consumed by crows and raccoons, released kilometers away in their scat.

This week in the Wild Lectionary, Jim Perkinson reminds us that Jesus’ original audience “is rural, hip deep in growing crops.” He goes on to tell us that this is a crowd that knows the “prophetic scripts narrating the story of towering trees and their demise.”

There are stories throughout the Old Testament – Perkinson focuses on Ezekiel and Daniel – that caution against the super-sized cedars of imperial power. Think of Egypt or Babylon.

Think of Monsanto’s monocrops, the cookie-cutter developments invading downtown, corrupting the suburbs, and while you’re at it, the corporatization of your favourite subversive festivals.

But what Jesus is doing here is different. It’s counterintuitive. It’s guerilla gardening at its best, and it points to where flourishing really happens. Not just for humanity, but for all of God’s good creation. Jesus flips the script speaking to these farmers, in the same way he does in the alleyways of the DTES – and beyond.

The Kingdom of God is like the Himalayan blackberry.

Displace the people, build more luxury condos, plant your decorative short-lived street trees all you want, but the kingdom of God is plucky. It will not be rooted out. It will provide sustenance and home for those you’ve ignored, and those you’ve pushed to the side.

No matter how you attempt to control it, God’s kingdom will grow like a weed, and it will grow fruit for the feeding of the nations on your doorstep.

In today’s Gospel, Jesus suggests that there’s someone planting these mustard seeds, and he does the same in Luke. But in Mark’s more radical take, human agency is not given. Mark simply tells us of “a grain of mustard, which was sown.” By whom, we don’t know. Maybe it took care of that itself. Nature, like the Kingdom of God, will find a way.

It is wild. Undomesticated. Kind of like the Himalayan Blackberry. It’s sowing itself. People come to chop down the thicket, but the roots and twigs have the power to seed a new plant in a new place, carried on by other members of the creation who are in on the subversive plot.

God’s kingdom of exquisite feasts providing nourishment, belonging, and inspiration for the world that surrounds us.

And this upside down kingdom reminds those in power, and us – when we get a little too power hungry – that the kingdom of God is a commonwealth of bird and mustard seed, raccoon and blackberry, child and beggar, which is both now and yet to come.

Testimony: We Are Not Broken

Epiphany: Returning by Another Road

A reed filled with wind

Expect God to show up

The next thing to come