My friends, tonight is truly a special night.  It is a holy night,  a night of symbols, a night of scripture, a night of hope and a night of life.  Tonight is the Passover of the Lord in which we in hearing his Word and celebrating his Sacraments share in his victory over death.  For those being baptized it is also a reminder that we are baptized into his death and raised into the newness of life as we are united in his resurrection as well.

Tonight we celebrate the fundamental defining event of our Christian community.  Just as the Passover is the defining celebration for the Jewish people, as Christians, the Pascha, is our Passover.  Tonight is not simply a memorial anymore than the Eucharist is a memorial, but we are actively participate in the saving acts themselves.  Just as Jesus is truly present for us in the bread and wine, tonight we are truly raised and delivered from the darkness of sin and hell.  Tonight is a special night, equaled by no other.

Why is this night different….it’s different because

Tonight we are delivered and freed, the light shines in the darkness and the light is not overcome.

How holy is this night, as wickedness is put to flight, and sin is washed away. It restores innocence to the fallen, and joy to those who mourn. It casts out pride and hatred, and brings peace and concord. How blessed is this night, when earth and heaven are joined and all people are reconciled to God.

This is what we hear in the joyous song of Easter called the Exultet, one of the most ancient of all Easter hymns dating back to before the 4th century.  This hymn is a call to faith that proclaims the saving grace we receive through Jesus Christ.  The power of this night is complete, all is made new.  All is restored to the perfect state in which it was originally created.

This is what we celebrate here tonight in our Easter Vigil celebration.  An ancient service held between sunset on Saturday and sunrise on Sunday celebrating the resurrection of Jesus.  Tonight is the culmination of the entire church year and it rehearses salvation history, is the traditional time for baptism and also the first celebration of Easter.  Easter Vigil draws upon all of our senses and invites us to enter fully into the paschal drama.  It is God’s continuing story with God’s people which reaches its climax in the announcement of the resurrection.  The cry of Christ is Risen is a world-changing event that effects us just as readily as it did the disciples.  It changes the equation.  It contradicts the world and its values.  It transforms.

In Mark’s Gospel account, we hear about the defeatism and faithlessness of those who follow Christ. We hear that after the sabbath, the 2 Mary’s are heading over to to anoint the dead body of Jesus with spices.  It was the typical Jewish practice that would cover the smell of decay of the dead body.  It was a reminder of the defeat that had occurred on Friday.  When the hopes and dreams of Jesus’ followers were dashed as he was executed by the powers of the world.  The hope for a new world appeared to have been crushed, the talk about the justice of God’s Kingdom seemed to have been nothing more than a pie in the sky.  Even their conversation as they headed towards the tomb contributed to that sense of defeat as they numbly wondered how they could even get into the tomb, anticipating their own failure since the stone at the entrance will defeat their efforts at anointing.

The events around the crucifixion also show us examples of faithlessness.  Peter who’s fear of exposure causes him to lie and deny Jesus.  Judas who sells love for money.  Jewish faith leaders who strive to preserve tradition and maintain power at all costs.  Disciples and followers who abandon Jesus upon his arrest and are scattered and hiding as he is convicted and executed.  Two women who are quick to believe in the defeat of Jesus run away in terror at the words of the young man unable to comprehend or follow through with his instructions to tell others.  We have many examples of the faithless behavior and despair of Jesus’ followers.

However, these images of faithlessness and defeat aren’t the end of the story.  The story isn’t fulfilled through the faithless and defeated individuals but it finds completeness in the victory brought by a faithful God.  The God who created this world and called it good, the God who breathed life into humanity, the God who brought God's people out of captivity, the God who split open the heavens at Jesus’ baptism, who tore asunder the curtain of the temple at Jesus’ death, will not be put off by our failures, our fear, our infidelities or any of our sophisticated schemes.  It is God’s presence in these moments, in the despair of the cross and the bleakness of the tomb and at all other points that completes this story.  It makes this a story of victory.  It is the faithfulness of God that results in 1. The Kingdom of God has already begun, 2. that the Son of Man has arrived, 3. and that the bodily resurrection has already started.  The power of God has made all things new and tonight we sing God’s victory song.  Because tonight is like no other night and we have been redeemed.

In the words of the 4th Century St. John Chrysostom's easter homily:

“Let all partake of the feast of faith. Let all receive the riches of goodness.

Let no one lament his poverty, for the universal kingdom has been revealed.

Let no one mourn his transgressions, for pardon has dawned from the grave.

Let no one fear death, for the Saviour's death has set us free.

It took a body and, face to face, met God! It took earth and encountered heaven! It took what it saw but crumbled before what it had not seen!

"O death, where is thy sting? O Hell, where is your victory?"

Christ is risen, and you are overthrown!

Christ is risen, and the demons are fallen!

Christ is risen, and the angels rejoice!

Christ is risen, and life reigns!

Christ is risen, and not one dead remains in a tomb!

For Christ, being raised from the dead, has become the First-fruits of them that slept.  To him be glory and might unto ages of ages. 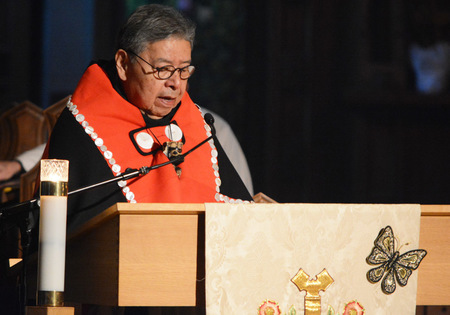 Christ has risen and we are changed forever

Why is this night different than all other nights?
Holy Week

They laid Jesus there