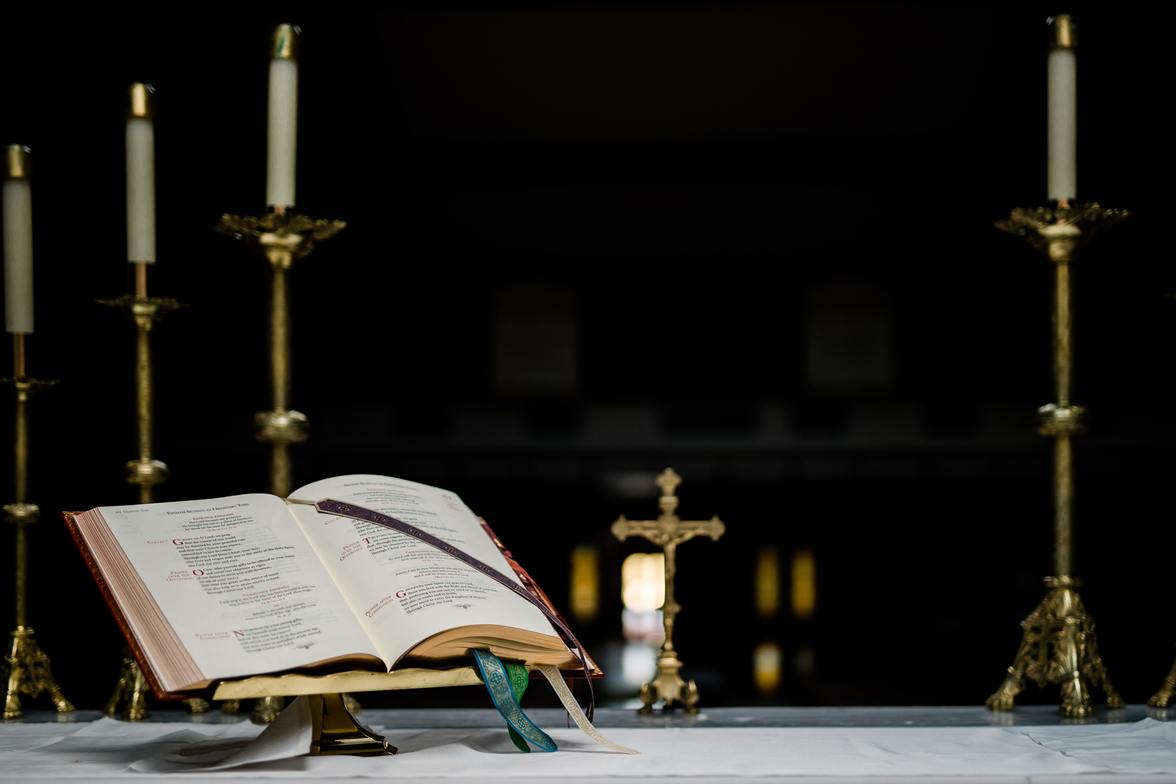 The Eucharistic prayers in the Book of Alternative Services (BAS), and in the Lutheran Book of Worship are rich with imagery that can enhance our understanding or offer new insight into what we’re doing at the altar. For this reason I like to change which Eucharistic prayers we use at the Cathedral on a monthly or seasonal basis. Here’s a little bit more about how the Eucharistic prayer fits into the liturgy and some background on the options offered in the BAS.

The word Eucharist comes from Greek, “from eucharistos grateful, from eu- + charizesthai to show favor, from charis favor, grace, gratitude; akin to Greek chairein to rejoice we sum it up with the term thanksgiving."

The BAS offers this insight into the Eucharistic Prayer:

The Great Thanksgiving—The eucharistic prayer is the great prayer of blessing said over the bread and the cup on the model of the Jewish table prayers of blessing. It is a prayer of faith addressed to God the Father, an act of praise and thanksgiving for the whole work of creation and redemption. The prayer is a unity from the opening dialogue to the final doxology and Amen. In the eucharistic prayer the Church expresses the meaning of the whole eucharistic action in which the memorial of redemption is made, and the Church is united with Christ in offering and communion through the sanctifying power of the Holy Spirit.

The Person and Work of Christ in the Eucharistic Prayers—The biblical imagery employed in the eucharistic prayers to express the meaning of Christ’s life, death, and resurrection for our salvation is rich and varied. Three images in particular stand out in the biblical material:

1  the interpretation of Jesus’ death as an act of vicarious suffering on behalf of the people on the analogy of the figure of the suffering servant of Isaiah 53,

2  the interpretation of Jesus’ death as a sin-offering on the analogy of the expiatory sacrifices offered in the Temple, and

3  the interpretation of the death and resurrection of Christ as an act of divine deliverance from the power of sin and death.

These images are fluid and entered in this fluid form into the liturgies and writings of the early Church.

In the Middle Ages and the Reformation period these images were given more precise definition with the use of “satisfaction” and “substitutionary” language. Jesus’ death was interpreted as a satisfaction for sin, or as an act of legal substitution. According to the latter idea, Jesus, although innocent, stood in the divine courtroom in the place of guilty sinners and suffered the sentence and punishment of death for our sins. As a result, Christians are acquitted of their sins and accounted righteous. In Cranmer’s eucharistic prayer the language of sin-offering and satisfaction are linked in the phrase, “full, perfect, and sufficient sacrifice, oblation, and satisfaction.” In the revised Canadian eucharist prayers, on the other hand, the images of vicarious suffering, sacrifice, and divine deliverance have been employed without binding them to the later medieval and Reformation themes of atonement.

Another issue closely related to the issue of atonement is that of eucharistic offering. In the early liturgies the language of offering is very fluid, but what it expresses essentially is that the gifts and the community are offered in and through the sacrifice of Christ. The close link between offering and anamnesis (remembrance) in the ancient liturgies makes it clear that the offering of the gifts and the community are entirely dependent upon the one sacrifice of Christ. In the Middle Ages the idea gained ground that the eucharist is a sacrifice in its own right, independent of the sacrifice of the cross. In this context, Cranmer, along with the other Reformers, rejected the idea of the sacrifice of the mass, emphasized the once-for-all character of the sacrifice of Christ, and allowed only the offering of “praise and thanksgiving” and of “ourselves, our souls, and bodies” in the eucharist. Cranmer and the Reformers were right in insisting on the once-for-all and the “full, perfect, and sufficient” character of the sacrifice of the cross, but Cranmer’s liturgy failed to give adequate expression to the unity between the Church’s offering and the offering of Christ expressed in the ancient liturgies and in the patristic theology of the “whole Christ,” head and members. The revision of the Canadian eucharistic prayers has sought to give this latter point clearer expression.

Eucharistic Prayer 1—This prayer is a new composition. It is rooted in the tradition of Apostolic Constitutions VIII and aims at a rich expression of the history of salvation.

Eucharistic Prayer 2—The model for this prayer is that which is found in the Apostolic Tradition of Hippolytus (c. 215). This is one of the most ancient eucharistic prayers that has come down to us. It has served as the basis for a number of Anglican, Lutheran, and Methodist revisions as well as for the second of the new Roman Catholic eucharistic prayers.

Eucharistic Prayer 3—The model for this prayer is Prayer B in the Book of Common Prayer of the Episcopal Church U.S.A. This prayer requires the use of a variable preface. These prefaces are an attempt to enrich the prayer by offering a more extensive thanksgiving for the particular aspect of the mystery of salvation being celebrated on that day .

Eucharistic Prayer 4—The model for this prayer is Prayer C in the Episcopal Prayer Book. Its language of praise for creation and salvation, using contemporary imagery, has made it one of the most popular of the new eucharistic prayers in the Episcopal Church. The Canadian version has a common refrain in order to encourage the use of this prayer as a text to be sung.

Eucharistic Prayer 5—This prayer is a new composition. Its language is simple and direct. It was written for use as a sung text with a common refrain and with celebrations with children in mind.

Eucharistic Prayer 6—This prayer is the work of an unofficial ecumenical committee of Roman Catholic, Episcopal, Presbyterian, Lutheran, and Methodist scholars. Its source is the eucharistic prayer in the liturgy of St Basil of Caesarea.3 It is Eucharistic Prayer D in the Episcopal Prayer Book. This prayer brings to our tradition the richness of the Eastern tradition as well as representing an ecumenical achievement.

Vestry 2023 is Anon! Let my prayer rise up like incense before you.