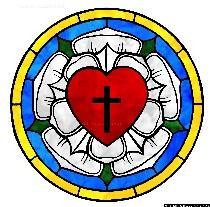 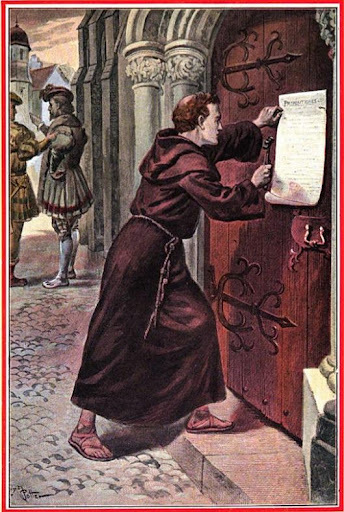 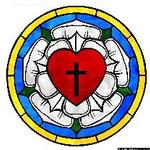 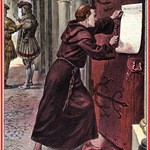 Most of the western world recognizes October 31 as Halloween or All Hallows Eve. For Lutherans - and indeed global Protestantism- Oct. 31, or the Sunday nearest, is celebrated as Reformation Day.  It marks the occasion, in 1517, when the Augustinian monk Martin Luther nailed up his 95 Thesis on the door of All Saints Church in Wittenberg, Germany (Saxony at the time).  His act is seen as the beginning of the “Protestant” Reformation.

In the 95 Theses’, Luther laid out his arguments for reforms that he saw as vital for the church's integrity. These reforms focused on the church's proclamation of the Gospel and the proper administration of the sacraments.  Some of the more radical reforms that Martin proposed were: ending the practice of selling papal indulgences (essentially “get out of purgatory” cards), ending cloistered ministries, lifting the rule of celibacy of priests, restoration to the laity of the sacraments in both kinds (bread and wine) and publication of the scriptures in the vernacular so the “common people” could read the Bible for themselves.

It is the focus on “justification by faith through grace” that is the most enduring legacy of Luther’s struggle.  For Luther and the Reformers, God’s relentless grace and forgiveness were not predicated on works of righteousness mediated through religious intercessors. Instead it is secured through the indefatigable love and grace of God for all people, as manifested in Jesus Christ freely given for the ransom of the broken world.

The nailing of the 95 theses to the door in Wittenberg came about two decades before the English Act of Supremacy, (1534). The latter declared the king the head of the Church of England in place of the Pope. Yet history is clear that Luther and the German Reformers after him, influenced the shape and spirit of the English Church and English religious life in general.  Thomas Cranmer, a young English priest who would go on to be the first protestant Archbishop of Canterbury, was suspicious of Luther's teachings.  Yet in 1534 Cranmer made his way to Nuremberg to study them. He fell in love with Lutheran theology and the niece of the prominent Lutheran Theologian Andreas Osiander. That same year he married the niece, broke his vows of celibacy and committed himself to the cause of reformation in the Church.

A perfect storm of factors came together causing a revolution that affected theology, politics, law, and economy. These factors were the printing press, the anti-papal political environment in Saxony, and Luther’s own didactic brilliance.

Some of these things are at play in our world today. Never before seen communication technologies are emerging daily. Political and economic upheaval, and environmental collapse affect the global community.  What Reformation might these factors make ripe for unfolding in our time?

It is recorded that at the Diet of Worms in April of 1521, Luther said in his own defense: “Here I stand, I can do no other, God help me”

How might we, as Anglicans and Lutherans joined in full communion, take up our stand to continue the struggle, Semper Reformandum!, for a Church more reflective of God’s justice and a society more willing and able to receive it?