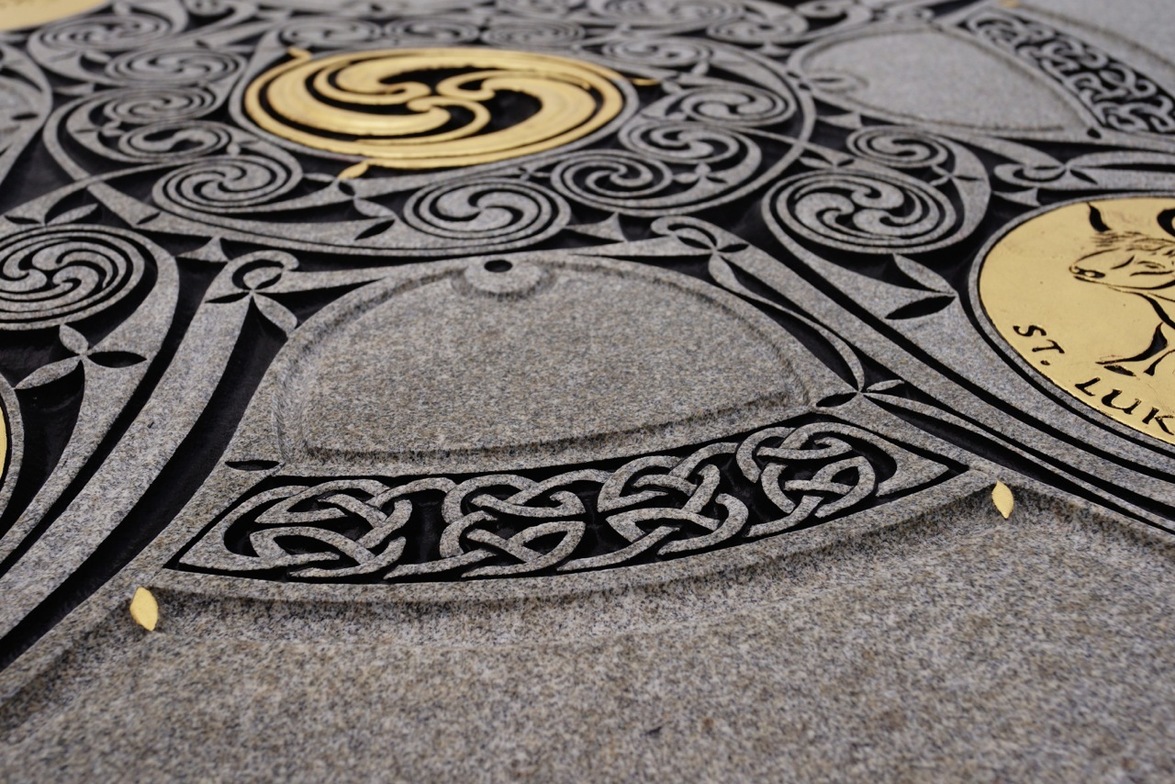 Celtic art often draws us in by capturing the deep essence of its subject rather than by directly representing its surface appearance. While I cannot easily describe this mystical quality myself, I can pass on the words of C.S. Lewis at the end of his novel, Perelandra: in writing of a vast cosmology, he also wrote one of the best descriptions of the dynamic of Celtic art that I know.

The circle is not less round than the sphere, and the sphere is the home and fatherland of circles. Infinite multitudes of circles lie enclosed in every sphere.

In the plan of the Great Dance plans without number interlock, and each movement becomes in its season the breaking into flower of the whole design to which all else has been directed. All the patterns link and loop together …”

I feel privileged to create new work within this ancient and beautiful tradition. Again, the words of C.S. Lewis best describe what I hoped to embody in this carving:

“He dwells within the seed of the smallest flower and is not cramped. Deep Heaven is inside Him who is inside the seed…Of many points one line; of many lines one shape; of many senses and thoughts one person: of three persons, Himself. Blessed be He!”

The central triskel, or three armed spiral, here refers to the Trinity. As the three lines move outward, form­­ing the rest of the design, it becomes an analogy for the Creator’s generation of everything from a continuous act of sharing His own existence. All lines begin in the center; all lines lead back to the center.

As this continuum of interlocking participatory being unfolds, other windows of light are framed and infused with illumination that is a reflection of the light (represented by gold leaf) in the originating core of the design. For these five mirrors or windows I first chose the Signs of the Four Evangelists. In Celtic Christian Britain and Ireland, various renditions of these four winged creatures, often called the Tetramorph, meaning “the 4 shapes”, a man, a lion, an ox, and an eagle, (representing Matthew, Mark, Luke, and John) found their way into many of the masterpieces of classic Celtic art. I have been wanting to add my own vision of them to the tradition, and the illuminated mirror roundels of this new Celtic Cross presented themselves as their natural habitat.

This combination of imagery is as native to the Celtic tradition (as exemplified by the Book of Kells, where it shows up repeatedly) as a Pieta or Calvary scene would later become to Western European art in general during the Renaissance. My interpretation of this ancient theme is as unique as the Cross that it completes, with echoes of the shape languages used in Gothic stained glass, as well as early pre-Christian Pictish petroglyphs from the West Highlands of Scotland. Wings are a constant feature of the Tetramorph, providing a thread of continuity between the diverse shapes and symbolizing their collective transcendence.

And I have added another image to the usual foursome: the fifth roundel is the most like a window, since it is presenting a view of the place where this Celtic cross is actually standing; that is, outside the transept of Christ Church Cathedral. It is an icon-like representation of the specific place where this stone will rest (hopefully for many centuries) and where countless people’s life journeys will continue to be blessed by the presence of Christ Church Cathedral.

The seed idea for this uncustomary addition to the usual four signs of the evangelists comes from an often repeated saying of a venerable priest, Fr. Armand Nigro, SJ, a family friend and one of the most inspired teachers whom I have ever known. He says that “The Land is the fifth Gospel”, referring to the times that he spent in the Holy Land, retracing the steps of Christ, letting the place itself speak to him. But I have chosen here to interpret his original aphorism in the broadest sense possible: the transcendent making itself felt and known (immanent) in this specific place. The Four Evangelists would have literally no voice if it were not for places in space and time such as this cathedral where the Gospel is proclaimed.

Notice that this new cross is itself represented in its niche beneath the large transept window. The arch of the niche is formed by a line that dives into the representation of the cathedral out of the surrounding context of abstraction, an analogy for the link between the visible and invisible aspects of the world. Within the context of the design, the idea comes across that the Cross is framed in direct reference to the cosmic and unseen realities that surround and uphold the everyday world, but which only become immanent and visible with, in, and through the Cross. In visual poetry, a Celtic Cross can itself be seen as the simplest and most vivid lines of a man with a halo.

It has been an honor to make this original artwork, and to be here for its dedication on the hundred and twenty fifth Pentecost celebrated here in your cathedral. Thank you!

For the Greater Glory of God