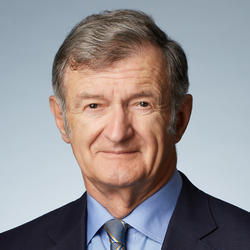 The parable of the mustard seed is understood to apply to the gift of faith: even the tiniest spark of faith can grow and become something that shapes one’s whole life. Longtime Cathedral parishioner, and recent Order of Canada recipient, Terry Salman has a slightly different take on that parable: the smallest contribution to a good initiative can grow into something that changes countless lives.

Giving back to the community is something hard wired into Salman by his parents. Early on in his adult life it manifested itself in situations where others might not recognize an opportunity to give back.

As a Marine Corps sergeant during the Vietnam war, while driving back to camp after a leave day at the beach, he noticed his troop tossing empty cans and rubbish from the back of the truck. Children playing by the side of the road scrambled to grab the items, only to be disappointed when they realized the items were refuse. Disturbed by his troop’s behaviour Salman stopped the truck, went round to the back and instructed his men to throw whatever useful items they had on them: food rations, candy, money. Salman is sure the men weren’t too pleased, but they complied because it was a direct order - much to the surprise and delight of civilians along the way.

After his time in the military Salman went into the investment and financing business. He soon realized “the investment business is not about giving back, it’s about having more, getting more.” While he was successful in the investment sector, it did not feed his soul.

That led him to get involved with St. Paul’s Hospital Foundation. He recalls being unsure about how much good he could do, but jumping in anyway. “For me it was uplifting because I got away from my money driven business.”

Salman’s mustard seed - the first tentative attempts to help raise money for the hospital - turned into a decades-long relationship. In that time he helped raise funds for what became a groundbreaking AIDS/HIV treatment centre and University of British Columbia and St. Paul's Foundation Chair in AIDS Research.

That experience encouraged Salman to keep doing his part - however small it might seem at the time. This led him to establish the Essential Needs Foundation. While originally focused on providing food to people living in the Downtown Eastside, the foundation has supported the Veterans Transition Network and the Cathedral’s Maundy Cafe.

Salman says he happily supports the Maundy Cafe because “it feeds a lot of people,” and that seemingly small piece of support - a hot, nutritious meal served in a community setting - can have a big impact on the lives of cafe guests.

While access to good food is essential, access to spiritual nourishment - especially in a time of physical distancing - can be just as important. Salman has also quietly supported some of the Cathedral’s various pastoral initiatives, like the Angel Phone Network and Christmas care packages for Cathedral families.

For Salman supporting these initiatives along with things like the Maundy Cafe is instinctive. “You need to give back. These are small things but they mean a lot to people...and can make a big difference.”

Of course Salman’s support of the Cathedral’s various projects and St. Paul’s Hospital is just the tip of the iceberg. In recognition of his decades of philanthropy and charity work he was named to the Order of Canada in 2019.

While he is proud to have been given the honour, he states emphatically “I never thought about this when I was doing my charity work.” Instead he focused on following his heart and doing what he believed was just the right thing to do, “you’re not going to be remembered by how much money you made, but by what you do.”