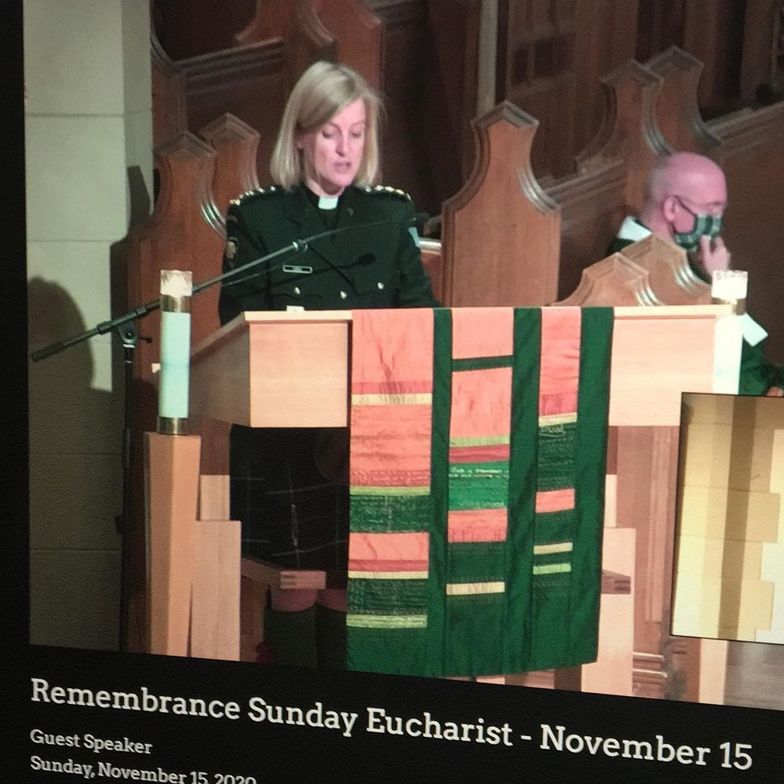 The men and women who serve in the armed forces are, all told, regular folks. Their hopes, dreams, fears and wonderings are pretty much like anyone else’s. Their work - or vocation - is, however, unique.

Maintaining their all round resilience requires support from folks who understand the special circumstances of their work. Answering that call can take someone - like Captain the Rev. Julie Lees- from an academic role as a United Church minister to carrying a pack of gear across a field as part of Basic Training exercises in order to qualify as a Chaplain to the Seaforth Highlanders.

In high school Lees took aptitude tests that indicated she would be a good match for careers in the police or military. Instead she became a minister in the United Church and didn’t give much thought to those aptitude tests. Years later, after leaving congregational ministry, people around her started asking if she had thought of being a military chaplain.

Enough people around her asked the question that she started exploring this avenue of ministry. “I was 48, I was sure I would be rejected. To my surprise they said ‘come on in,’” Lees recalls.

In September 2017 she entered basic training. Lees is quick to point out that her basic training program was for chaplains and medics in the reserves and was a four week program. Basic Training for new soldiers is a ten week program.

Nonetheless, Lees and her cohort went into the field, learned battle procedures, how to don gas masks, and went through a series of exercises similar to those new recruits go through. “We get a taste of what soldiers go through,” she recalls, adding, “I understand what it means when someone says their feet are sore from wearing the [military] boots all day long.”

In the three years since she entered the armed forces reserves Lees says she has been surprised, challenged and rewarded.“I surprised myself that I could complete basic training, and dig it!” she said.

Because Lees is in the military reserves, and therefore a part time Chaplain, it can take longer to get to know people and build relationships with members of the regiment. Her weekly involvement in training exercises and other aspects of regimental life have allowed her to see- and be moved by- how much members of a unit care for each and give of themselves for each other.  “I’ve been surprised by how much I also want to give of myself to this role,”says Lees.

Her role as chaplain requires her to minister, not only to service personnel who belong to the United Church, but facilitate worship and spiritual care for service personnel of other faiths and care for everyone. In doing this she has built relationships with other churches, including Christ Church Cathedral. In December Lees will presiding at a Blue Advent service at the Cathedral along with the Rev. Marnie Peterson. The service will be open to anyone for whom the Advent and Christmas season is difficult.

“I’m honoured in ministry anytime someone trusts me enough to share what they're going through," she says.

Christ Church Cathedral is the Regimental Church of the Seaforth Highlanders. The retired regimental colours are laid to rest in the east alcove of the church. Captain the Rev. Julie Lees will be presiding at a Blue Advent prayer service at the Cathedral on December 7, along with the Rev. Marnie Peterson. Watch for a registration link coming soon.

Jun 19
A God vast and intimate