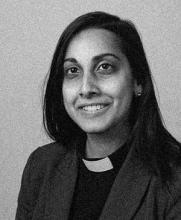 The stress of moving across town - any town - can wipe the smile off most people’s faces. Yet as the Rev. Areeta Bridgemohan talks through the logistics of moving her family across the continent, she could be talking about what she did last weekend. She smiles broadly as she settles onto the floor of her toddler’s sunlit room and, reflecting on the unexpected delay in her move to Vancouver says, “I’m looking at it like a time of sabbatical.”

When your life -and your journey to your vocation- has been a map of the world, it takes more than moving from one coast to another to phase you.

Born in Guyana, Areeta grew up in Rome, Italy where her father worked for a non-governmental organization. While she grew up enjoying gelato in Roman piazzas, she attended English language international schools that prepared her to pursue post secondary studies “in the Anglo world.”

“My Dad’s whole family lives in Canada, so it made sense to come here for university,” Areeta recalls. At 18 she moved to Montreal and attended McGill University, where she discerned her first vocation: public health.

“In public health, ‘health’ is described as something more than just the absence of disease. Health is a whole group of things that work together. I loved this. I felt this was a way of making a contribution to the world,” she says. It helped that she grew up watching her father’s work and had seen the impact public health work could have on communities.

“Public Health in a sense brought together different parts of myself and was in service to the world. I was living out Christian discipleship through it. But my vocation to ordained ministry took longer to figure out,” says Areeta.

After completing her bachelors at McGill, Areeta went on to Michigan State University to study for her masters in public health. In 2008, between the first and second year of the program, she was invited to attend Lambeth. This was the next leg of her discernment journey.

“I wasn’t even baptized when I went to Lambeth, but my experience at Lambeth led me to baptism,” Areeta says.

At Lambeth she was in a group of about 50 young people, lay and clergy, from around the world. “It was really cool. It was also really powerful to be surrounded by so many people with the same faith and look at life through the lens of that faith.”

She returned to Michigan feeling that “my world had turned upside down” and asked to be baptized. Yet the call to faith was not complete. There was still something more she felt she was supposed to be doing with this faith.

With her masters in Public Health completed, and having been baptized, Areeta finally knew what the next step was: priesthood. She entered the seminary for the Diocese of Michigan. “My bishops’ approach is ‘we ordain priests for the world’,” she says, which is how she found herself at Trinity College at the University of Toronto. She did parish placements in the United States and at St. Paul’s Inside the Walls, in Rome, which runs a centre for refugees.

“The journey from my baptism to my ordination in 2015 was seven years, which is wild, but looking back it all makes sense,” she says, even moving to Vancouver to become Vicar of Christ Church Cathedral.

“A friend of mine saw the job posting and sent it to me, saying ‘this sounds like you,’” Areeta recalls. “One image, of a candlelight service, looked so warm and inviting it made me stop and pay attention. I read about the Cathedral’s spirituality and the way this Cathedral straddles different communities and groups. It spoke to me of a community willing to make spaces where people can dwell with questions in faith and mystery,” she says.

Once Areeta settles in Vancouver she will oversee the formation and pastoral offerings at the Cathedral. “My approach to formation is creating spaces of authenticity & vulnerability, spaces where people feel heard, where there is equitable sharing of space, and where people can feel free to be real about who they are and how they experience the world and God.”

“Parishioners can expect there will be a contemplative aspect to offerings I put together. They will be expected to engage personally about their own lives - either internally or sharing. I also hope to continue working on how to bring spirituality to civil justice issues, to ask ‘what role does our faith have in this ?’” she says.

You are invited to take part in the Coffee Hour after the 10:30am service in Parish Hall on Sunday May 15th. Rev. Areeta Bridgemohan will be on hand to meet you!

She is expected to make her permanent move in September.

Vestry 2023 is Anon! Let my prayer rise up like incense before you.