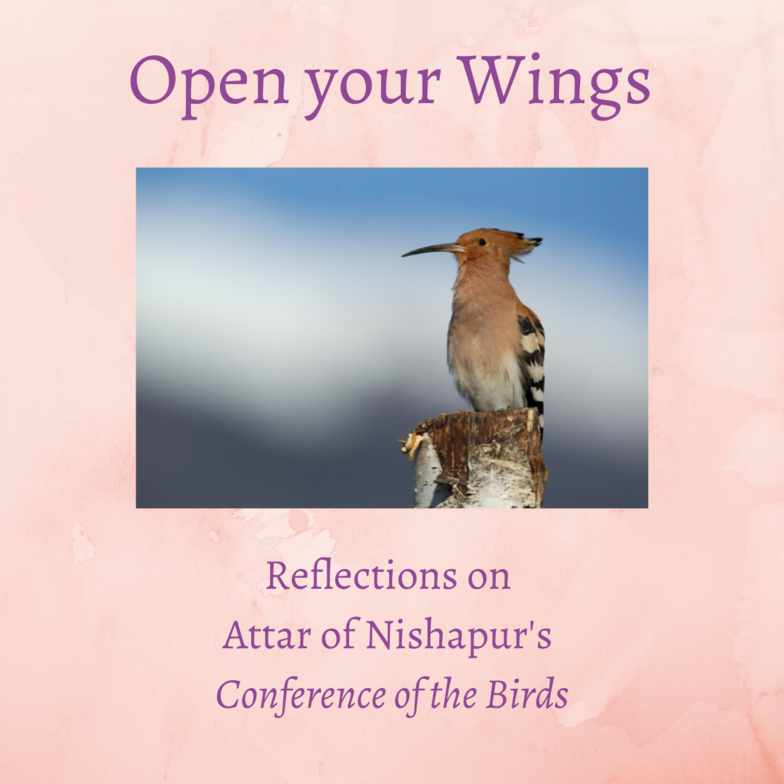 “Attar, you’ve scattered with each breath

You’ve sprinkled your perfume from horizon to horizon.

You’ve strummed your music in the key of love.”

After the endless parables from their hoopoe sheikh, the birds have learned the truth of what the journey to the Great Simorgh will demand of them. Some of them, Attar claims, are so distressed that they fall down dead right there, just from hearing what awaits them.

And then, the remnant is off. It seems rather abrupt! But like so many things in life, the hardest work is often in the preparation. As Lent seems to last forever, so Holy Week, with all of its drama, seems to be over in a heartbeat.

Jesus’s journey to the Cross would have been familiar to these birds, for the vast majority of them do not complete their years-long journey. Some simply abandon it for earthly pleasures or temptations, and some weaken and fall behind. Most, however, are killed: through drowning, heat exhaustion, hunger, injury, or by wild animals.

“A world of birds set out, and there remained

But thirty when the promised goal was gained,

Despite it all, they arrive at the luminous gates of the Great Simorgh, which are so awe-inspiring that the birds immediately wonder how they could ever gain admittance.

A herald approaches them, asking their business. The appearance of this figure is left vague. Sholeh Wolpé and Peter Avery call it “a herald of Glory”; Dick Davis “a herald from the starry retinue.” It’s an angelic being, perhaps beyond description.

The birds tell the truth: they’ve been journeying for years to the court of the Great Simorgh to pay homage.

The herald responds that they cannot come in. They have nothing to offer and look far too pathetic to be acceptable to the Great Simorgh, to whom a hundred thousand armies appear as ants.

But the birds will not take no for an answer.

“They all cried out: ‘Would the Great Ruler of the World

throw us out with such contempt?

It is impossible to suffer degradation from that Great One,

for even the Beloved’s scorn is a gift and, therefore, elevation.”

The herald warns them that if they continue, the sheer glory of the Great Simorgh will burn them up where they stand.

“The herald said: ‘The blaze of Majesty,

And if your souls are burnt, then all the pain

That you have suffered will have been in vain.’”

The birds are still unfazed:

“That love-scorched group cried out:

‘Here are our souls and here is a blazing flame!

A moth never flees the flame, because

it is in the fire that a moth finds its Beloved.

Even though union with the Beloved

may not be our fortune,

at least the burning is ours.

The Great Simorgh may not lend us a hand

The birds have learned well from their sheikh.

This satisfies the herald, who finally admits them. They enter into the court, and are brought to a position of honour near the throne.

The herald brings them a script, which Peter Avery notes is a word which can also refer to “a patch on clothing…evocative of the patched cloak of the dervish,” and commands them to read it.

Attar notes that he will explain by way of another parable what they read recounted there, and tells a story of Joseph meeting his ten brothers for the first time since they sold him into slavery, as recounted in Genesis 42 and 43. Joseph asks his brothers (who do not recognize him) a favour. He wants them to read a set of papers he has that are in Hebrew.

This seems a simple task and the brothers are thrilled to help, hoping to find favour with the young governor who promised them relief from the famine they are suffering.

Of course, this is an act of deceit. The papers Joseph gives them are, in fact, his papers of purchase as a slave.

The brothers become extremely distraught upon reading them. When Joseph “innocently” asks them what’s wrong, they respond that they don’t dare read the papers aloud, lest they risk their necks.

The inference, then, is that the script given to the thirty birds recounts all of the acts committed over the course of their lives – including all of their sins and faults.

Shown as they sit as invited guests in the place of honour, they are terrified. Attar uses this opportunity to convict the reader:

“Don’t you know, you nobody beggar,

that you sell a Joseph at every breath?

Joseph in the end will be your king,

the jewel of the High Court,

and you will go to him as a naked, hungry tramp.

If money was what you wanted,

why did you sell him so cheap?”

This might seem harsh! But Attar wants to be sure that the would-be Lover knows exactly what she’s getting into if she decides to pursue the Beloved. It’s not about heaping guilt upon the soul, but about radical self-honesty – accepting and owning the ways we screw up, rather than trying to deny, run, or hide from them, which is what the world tells us to do.

For us Christians, who re-enact the story of Jesus’ Passion as co-conspirators, speaking aloud the words of the crowd shouting, “Crucify!” we might rewrite this passage for our purposes:

“Don’t you know, you nobody beggar,

that you betray a Jesus at every breath?”

Again – radical self-honesty and accountability for the ways we fail is what’s necessary here to progress. And this is better news than we think: after all, the birds are sitting in a place of honour! Here, there need be no secrets between Lover and Beloved. We are seen exactly as we are: not put on a pedestal or in the gutter, but on our feet as whole yet flawed mortal creatures. For what was Joseph’s eventual response but love, acceptance, and forgiveness, even after the worst sins had been committed against him by his own family? And did Jesus not return to us in the same spirit of love and forgiveness still bearing the scars of his encounter with the violence of the state?

The birds have thereby passed the last test:

“The chastened spirits of these birds became

Then, as by shame their spirits were refined

Of all the world’s weight, they began to find

A new life flowed towards them from that bright

Their souls rose free of all they’d been before;

The past and all its actions were no more.”

Once this has occurred, the real hidden treasure of this story – Attar’s grand masterstroke, which comes from a Persian play on words – is finally revealed:

“They saw the face of Simorgh,

but in a reflection.

And when they looked closer, they saw the reflection of their own:

Once we have been through the journey of seeking and radical self-honesty, we are wholly taken up in the presence of God. There is no longer any separation between Lover and Beloved.

Jesus shows us this very truth in his return to us. He did not return in a different guise, as an angel or even in a new or unrecognizable body. He came in a form that Mary recognized…but bearing the marks of his crucifixion. This was to show us proof of his complete forgiveness. He would not erase the past as though it did not occur. We can’t deny what we’ve done, but we are fully and totally forgiven. And the whole cosmos is caught up in the new fire of resurrection.

were illusions, all of it.

Nothing you have said or heard

The valleys you traversed

the bravery you displayed

You were asleep in the valleys of my attributes.

You have come and remain thirty astonished birds

without hearts, souls, or patience,

but I am infinitely better than any thirty birds.

I am the Faultless, the Absolute Thirty Birds.

Come and obliterate yourselves in Me,

become Me to find yourselves once more.”

The story goes on a little longer after this moment. After a hundred centuries, the birds are returned to themselves by grace. Sholeh Wolpé includes a beautiful note explaining her lines:

“…they traveled from fana to baqa, from annihilation to eternal existence.”

Readers of the Gospel of John may feel a touch of familiarity here. The Beloved would never ask us to remain lost to ourselves: that would be an unhealthy, abusive relationship. Our Beloved treasures everything that makes us who we are. We need not fear naming our faults because all that we are is sought out in desperate, audacious love.

Friends, as we approach the Triduum, the time has come to fold our wings in reverence as the darkness descends. We’ll want to be rested and in full voice for the coming dawn symphony of “Alleluia! Christ is risen!”

Thank you for joining me on the journey.

“I have said all I needed to say.

Now is the time for action.”