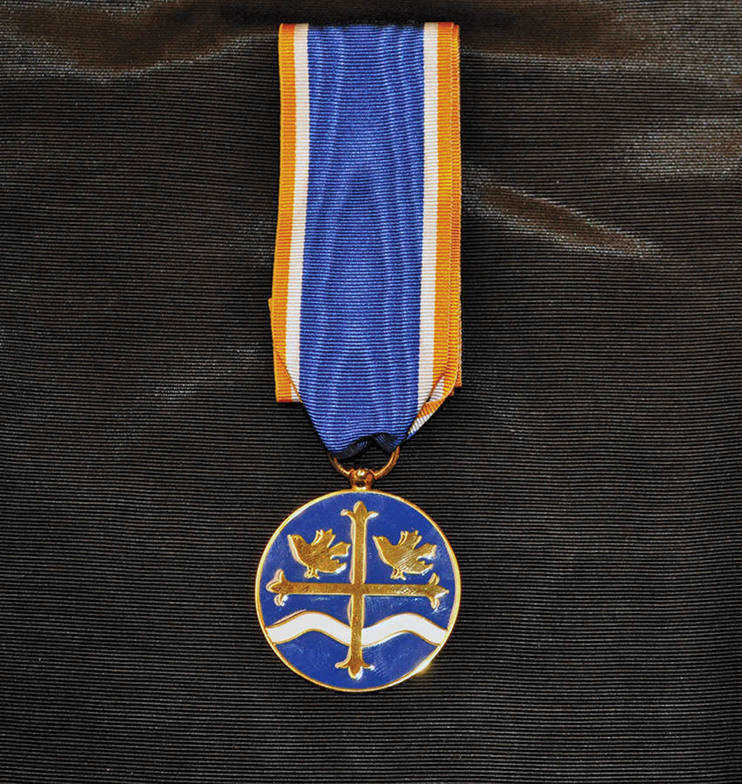 Three members of Christ Church Cathedral’s parish will receive the Diocesan honour given to lay people (non-clergy) for outstanding service: the Order of the Diocese of New Westminster. The ceremony involving the three inductees from the Cathedral will take place Sunday, November 8 during the 10:30 Choral Eucharist.

Those getting ODNW will get a medal and a pin, and the right to put ODNW after their names. Only one person from each parish can be nominated annually, are awarded every two years, and Archbishop Skelton adds a few more names for diocesan activity. Kate Walker was a parish nominee; Ted Chiasson and Kevin Smith were chosen by the Archbishop for the award.

Kate Walker cycles to Christ Church Cathedral several times a week to do a whole host of activities. She’s been a member of the parish for 21 years.

A lot of her tims has gone to the Maundy Café. She’s been involved with this Cathedral outreach program to the hungry and homeless since its beginning. Before that she was very involved in giving out sandwiches.

“I was like so many people somewhat anxious around the homeless,” Kate recalls. “I needed to get over that.” Now it’s natural to sit down with the Cathedral’s guests and chat. “You quickly learn that everybody’s got a story.” Kate headed the Wednesday team of volunteers at the café.

Another ministry Kate attends is the hospital visiting program. Her involvement in that goes back 20 years. Once a week she visits a hospital and gets a list of those who have said they are Anglican. She knocks on hospital doors and introduces herself as a lay chaplain. “Often it’s mostly just to chat,” said Kate, but sometimes there are deeper spiritual concerns. This work was set back by the pandemic. Recently though, lay chaplains have been allowed back with protective equipment. “I have had to go out and buy some hospital scrubs to wear.”

Kate’s favorite ministry is Healing Touch, for which she has been coordinator for the past seven years. She is also on the Healing Prayer team, and has been a lay administrator of Communion. If you see her bicycle in the bike rack beside the side door of the Cathedral on Burrard Street, you’ll know she’s either attending a service or at work on one of her many ministries. All this work comes from a deep love of Christ Church Cathedral.

Working on many parish and diocesan committees has been Ted Chiasson. He has been a member of the Cathedral parish for just under 20 years. Ted’s first assistance came even before he retired as a judge on the BC court of Appeal, when after the 2011 Stanley Cup riot he put Dean Peter Elliott in touch with Crown prosecutors to work out ways to include restorative justice to young offenders who had come afoul of the law by their behaviour.

It was after retiring from the bench in 2015 that Ted’s volunteer work at Christ Church Cathedral began in earnest. He became a parish trustee, worked with the Parish Council, and served on the parish canonical committee to choose vicar Helen Dunn.

When Dean Peter announced that he would retire in 2019, Ted chaired a committee that worked with a consultant and decided that the parish should first have a transitional rector. The Rev. Richard LeSeuer was selected. Then Ted and many others set to work on the search for our permanent rector. After a long process, the Rev. Christopher A. Pappas was chosen.

Ted was also part of a diocesan group, including the Diocesan Vice Chancellor Kevin Smith, which helped revise the Diocese’s Canon Law, a huge task. The Diocesan Synod approved the revision without controversy.

Volunteer work in the community comes natural to Ted. He has helped in the governance of several arts groups, for a while chairing the Vancouver Symphony Board, and working with the Vancouver Yacht Club. He also sings in the Encore Choir. Ted said he enjoys doing what he can to help the parish. “I have a huge affection for Christ Church Cathedral and its initiatives.”

In addition to his work as a Cathedral Trustee, Kevin Smith serves as Diocesan Vice Chancellor, one of the four legal officers of the Diocese. The office of Vice Chancellor was recently created, and Kevin is the first person to hold it.

For two years Kevin worked on the complete rewrite of the Diocese’s Canon Laws – essential the bylaws that govern how the Diocese operates. It was a big job, and for much of the time the group involved met weekly. One of the members on the rewriting team was Ted Chiasson. “I took the job largely because I wanted to work with Ted,” said Kevin, who has great respect for his senior colleague. In his day job Kevin does a lot of public law dealing with Aboriginal law, human rights, and religious and other not-for-profit groups, so he was well suited for the task.

Kevin grew up at St. Helen’s in Vancouver. After being away from the city for a while, he returned in 2016 and joined the Cathedral. He and his family have made many friends in the parish. “I have been really enjoying the Cathedral and keen to help out.” Besides attending the Men’s Breakfast and Family Ministry groups, Kevin serves on the board of the 127 Society that operates several buildings for lower income tenants.

Two years ago Kevin attended an installation service because his grandmother Shelagh Smith received the ODNW for her years of work at St. Anselm’s, Vancouver. Now the grandson will be so honored.

*Due to Covid 19 safety requirements, 2020 ODNW recipients are being inducted during worship services at their homes parishes in early November.

May 9
Holy Currencies: The Currency of Money